In this lesson we will learn to make Particles to Fluid Conversion with Fume FX as shown in the example below:

01                In this lesson we are going to convert the bunch of particles created in the last lesson to dissipate like smoke into nothing. So for that we have to take the help of Fume Fx. Dive inside the the ‘Geometry’ Roll-out inside the ‘Create’ panel and create a ‘Fume FX’ Container Grid around the Hero Object. Make sure that we are leaving enough space for the dissipate effect. 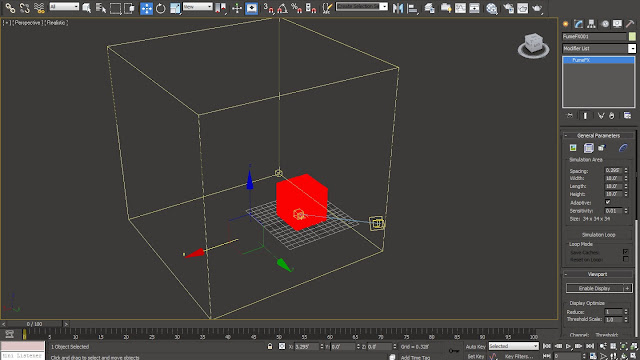 02                Create a Fume FX ‘Simple Source’ from the ‘Helpers’ Roll-out inside the ‘Geometry’ panel. As this is going to act as the trigger of dissipation, we will position it at the lower end corner of the particles. 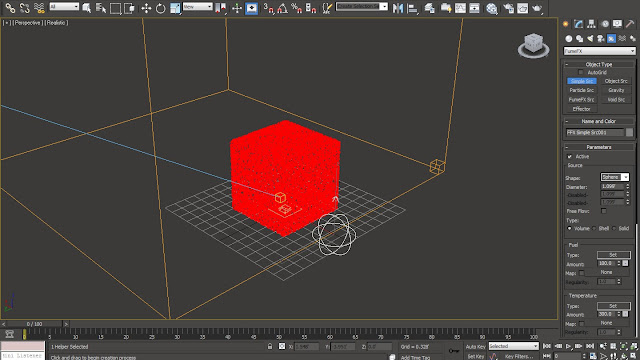 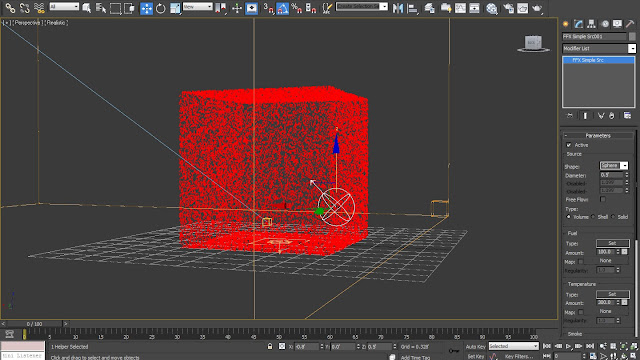 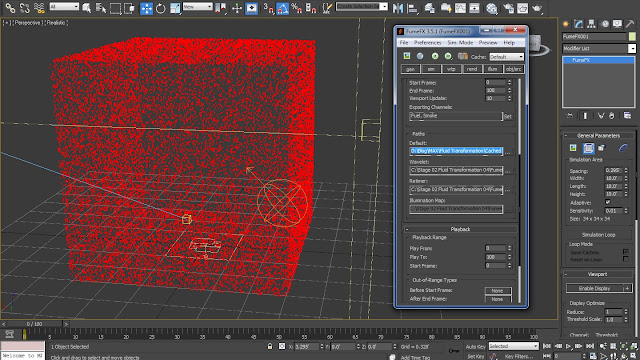 05                Inside ‘Simulation’ Parameter Dialogue Box turn off the ‘Simulate Fuel’ option under the ‘Fuel’ category in order to forbid Fume FX from generating fire. Also decrease the ‘Maximum Iterations’ to 60 in order to generate faster result while working and checking the result again and again. 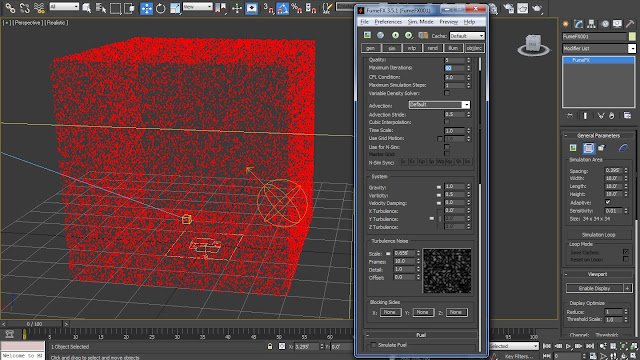 06                Select the ‘Simple Src’ object and access the ‘Smoke’ parameter in order to create a bust of smoke at a certain point by animating the ‘Amount’ parameter. Turn on the Auto Key and create an animation of ‘Smoke’ value remaining at ‘0.0’ value from the first 20 frames, then increasing to the value of ‘3.0’ at 30th frame and then again decreasing to ‘0.0’ at 35th frame. 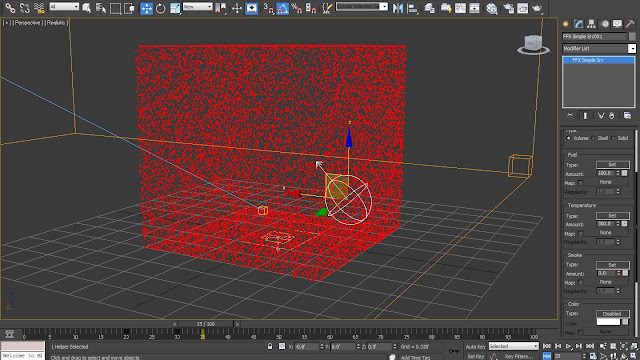 07                Jump back to the ‘Gen’ Parameter Dialogue Box and decrease the ‘Spacing’ value to ‘0.05’ feet. Open up the preview window from the ‘Open Preview Window’ option and play back the simulation by hitting ‘Start Default Simulation’ option. 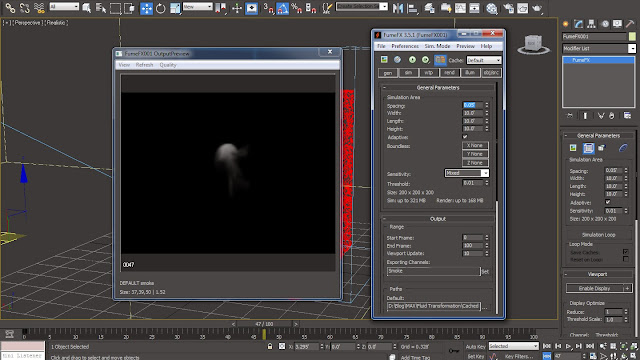 08                Play back the simulation in order to notice that the area where the smoke is getting generated is really small. Hence we are required to increase the ‘Diameter’ value of Sample Src to 2.0. 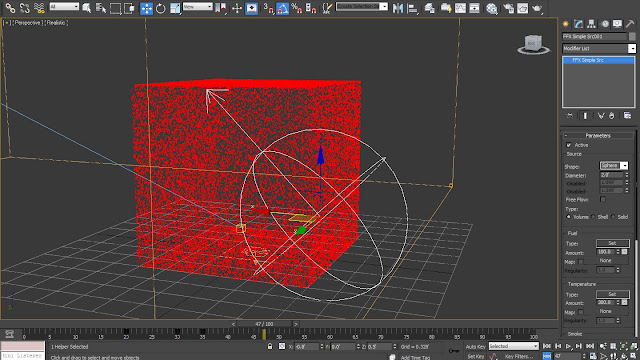 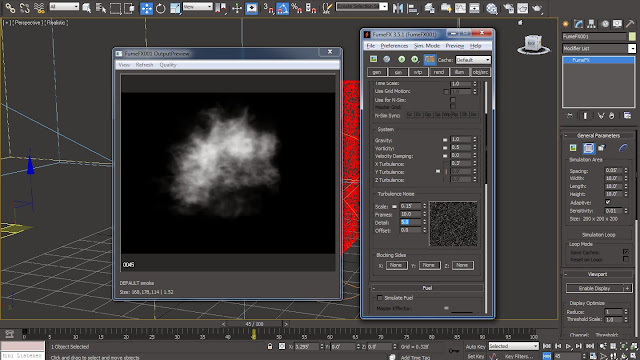 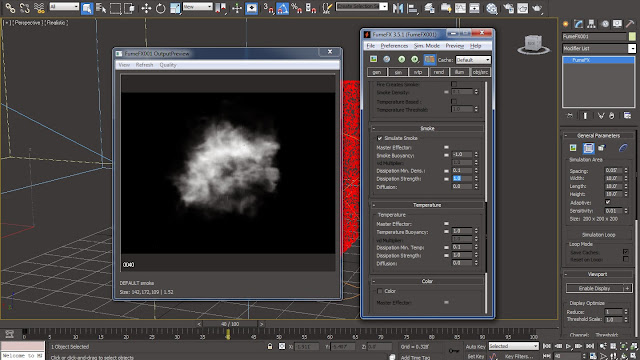 11                In order to visualize the simulation in view-port we will now add the ‘Velocity’ channel inside the ‘Exporting Channels’ parameter under the ‘Gen’ Parameter Dialogue Box. From the modify parameters of ‘Fume FX Container Grid’ turn on the ‘Velocity’ option which will fill the whole container grid with different colored lines (Vector Information) representing the area under the influence of fume as well as the empty area. 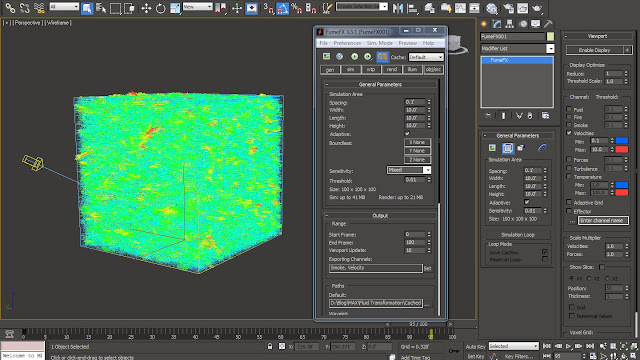 12                Now in order to make the view of the ‘Fume FX Container Grid’ less complicated we will turn on the ‘Show Slice’ option with ‘XZ’ orientation. Move the ‘Slice’ plane to the center of the box where the main action is happening by changing the ‘Position’ value to ’48’. Also increase the ‘Thickness’ value to ‘5’ in order to see the simulation in the 3D space and to get a better idea what the ‘Velocity’ information is doing. 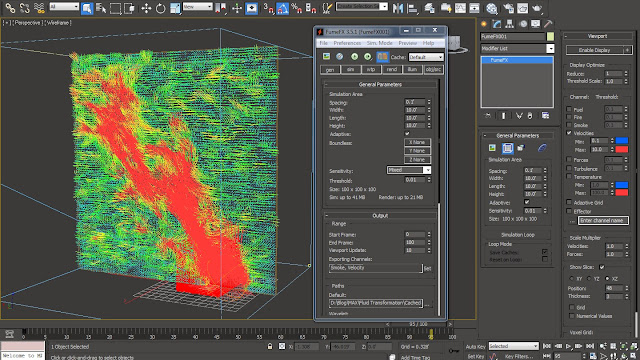 13                In the view-port we can now see the particles being pushed around and being sliced due to the small size of the ‘Fume FX Container Grid’ and angle of the ‘Fume FX Simple Source’. Hence we will now reposition and re-size our ‘Fume FX Container Grid’ by increasing the ‘Width’ and ‘Height’ values inside the ‘Gen’ Parameter Dialogue Box to ‘15.0’ feet and ‘20.0’ feet respectively. Also change the orientation of the ‘FFX Simple Src’ to ‘25.0’ degrees in ‘Y’ axis. 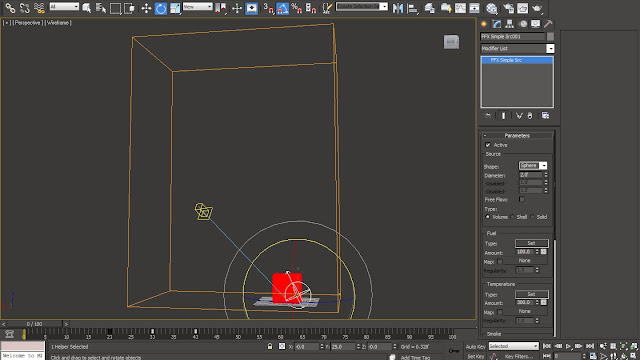 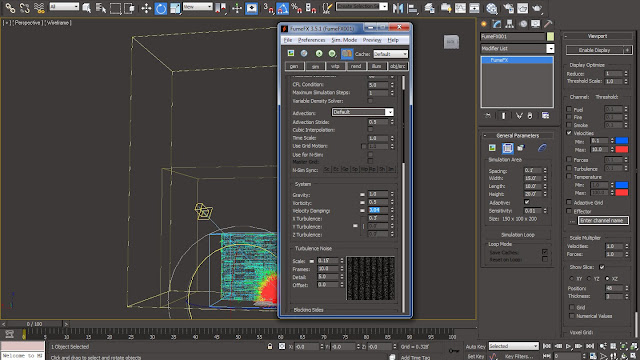 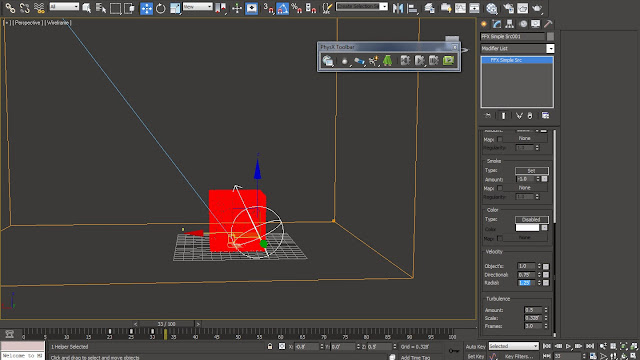 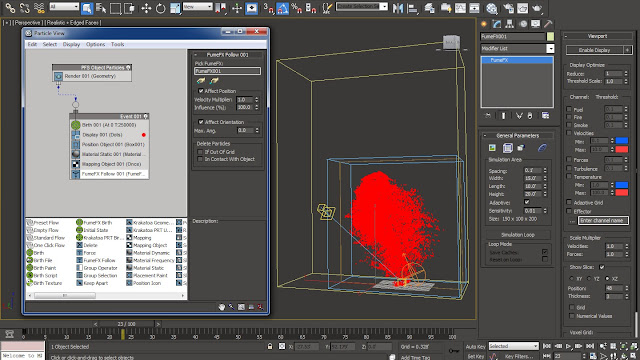 17                If the particles are getting pushed outside the container grid all we have to do is to readjust the ‘Fume FX Container Grid’ as well as the ‘FFX Simple Src Object’. Inside the ‘Fume FX Follow’ parameters bring down the ‘Velocity Multiplier’ and ‘Influence %’ to ‘0.5’ and ‘50.0’ respectively. 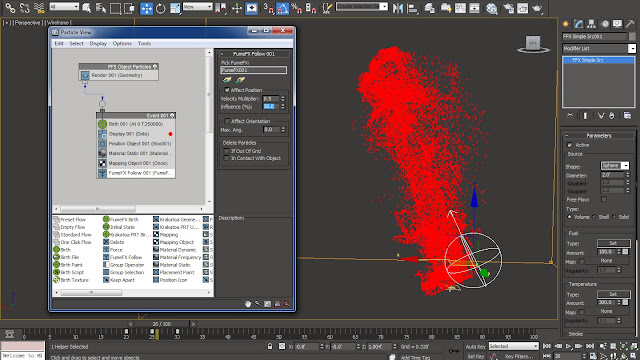